The Book of Ruth illustrates the redeeming and restoring love of Jesus, who takes the broken pieces of our lives and replaces ashes for beauty.

Ruth’s story is a beautiful reminder that even our darkest circumstances can be redeemed and restored.

Now Boaz had gone up to the gate and sat down there. And behold, the redeemer, of whom Boaz had spoken, came by. So Boaz said, “Turn aside, friend; sit down here.” And he turned aside and sat down. And he took ten men of the elders of the city and said, “Sit down here.” So they sat down. Then he said to the redeemer, “Naomi, who has come back from the country of Moab, is selling the parcel of land that belonged to our relative Elimelech. So I thought I would tell you of it and say, ‘Buy it in the presence of those sitting here and in the presence of the elders of my people.’ If you will redeem it, redeem it. But if you will not, tell me, that I may know, for there is no one besides you to redeem it, and I come after you.” And he said, “I will redeem it.”

Then Boaz went up to the gate of the city—an open area, unenclosed by walls; the place where, in ancient times, and in many Eastern towns still today, all business transactions are made.

God works His purpose even under adverse circumstances.

It is amazing to me that the close relative “happened” to walk by that very moment! It shows the providence of God and His prefect timing. Boaz stood before the ten elders and told them about the circumstances of Naomi and Ruth.

V.4 there is none to redeem it beside you; and I am after you —(See on De 25:5). The redemption of the land involved a marriage with Ruth, the widow of Mahlon.

He Refuses the Redemption.

V. 5 Then Boaz said, “The day you buy the field from the hand of Naomi, you also acquire Ruth the Moabite, the widow of the dead, in order to perpetuate the name of the dead in his inheritance.” Then the redeemer said, “I cannot redeem it for myself, lest I impair my own inheritance. Take my right of redemption yourself, for I cannot redeem it.”

we are not exactly sure why the close relative could not redeem it, all he said is that it would mess up his inheritance. Obviously, he was thinking of only the benefits for himself or maybe he wanted to only preserve his family line.

When the kinsman refused to perform his duty to the family of his deceased relative, the widow was directed to pull off the sandal and spit in his face, because he would not build the house of his brother. Yikes, that sound pretty harsh but it was a custom of that day.

Deuteronomy 25:9 the widow must walk over to him in the presence of the elders, pull his sandal from his foot, and spit in his face. Then she must declare, ‘This is what happens to a man who refuses to provide his brother with children.’

When the man’s sandal is loosed from his foot, he has symbolically refused to take the woman as his bride.

He willingly went to the cross for you and I, for the sin’s of us all. He took the place that we deserved. Jesus is our Kinsman Redeemer, Bridegroom King. He gave His life to purchase freedom for everyone. This is the message God gave to the world at just the right time. 1 Timothy 2:6

Surely He took on our infirmities

and carried our sorrows;

yet we considered Him stricken by God,

struck down and afflicted.

But He was pierced for our transgressions,

He was crushed for our iniquities;

the punishment that brought us peace was upon Him,

and by His stripes we are healed.

each one has turned to his own way;

and the LORD has laid upon Him

the iniquity of us all.

He was oppressed and afflicted,

yet He did not open His mouth.

He was led like a lamb to the slaughter,

and as a sheep before her shearers is silent,

so He did not open His mouth.

By oppression and judgment He was taken away,

and who can recount His descendants?

For He was cut off from the land of the living;

He was stricken for the transgression of My people.

Mark 10:34 who will mock Him and spit on Him and flog Him and kill Him. And after three days He will rise again.”

Romans 5:8 But God demonstrates His own love toward us, in that while we were still sinners, Christ died for us.

The word redemption means to purchase in the marketplace. It is a word that describes the believer being purchased out of the slave market of sin and set free from sin’s bondage! Hallelujah! The purchase price for the believer’s freedom and release from sin was the death of Jesus Christ. 1 Cor. 6:20, 7:23; Rev. 5:9, 14:3, 4.

Christ redeemed believers from the curse and bondage of the law that only condemned and could not save Gal. 3:13; 4:5. Believers have been redeemed by the precious blood of Christ 1 Peter 1:18 to be a special possession for God Titus 2:14.

PONDER: Can you see a picture of the Gospel, in the book of Ruth? Who paid the price for our salvation? How did Jesus “purchase” our lives?

the bride of christ

The church is comprised of those who have trusted in Jesus Christ as their personal Savior and have received eternal life. Christ, the Bridegroom, has sacrificially and lovingly chosen the church to be His bride (Ephesians 5:25–27).

Just as there was a betrothal period in biblical times during which the bride and groom were separated until the wedding, so is the bride of Christ separate from her Bridegroom during the church age. Her responsibility during the betrothal period is to be faithful to Him (2 Corinthians 11:2; Ephesians 5:24). At the rapture, the church will be united with the Bridegroom and the official “wedding ceremony” will take place and, with it, the eternal union of Christ and His bride will be actualized (Revelation 19:7–9; 21:1-2). I can’t wait!!!

I just want to cheer for Boaz! Boaz, Boaz he’s our man if he cant do it no one can! Boaz steps up and redeems Ruth V. 10, Moreover, Ruth the Moabitess, the widow of Mahlon, I have acquired as my wife, to perpetuate the name of the dead through his inheritance, that the name of the dead may not be cut off from among his brethren and from his position at the gate. You are witnesses this day.”

All the people and the elders, said, We are witnesses—A multitude of witnesses! And the crowd blessed Boaz!

Therefore, since we have so great a cloud of witnesses surrounding us, let us also lay aside every encumbrance, and the sin which so easily entangles us, and let us run with endurance the race that is set before us. Hebrews 12:1

Men are ready to seize opportunities for increasing their estates, but few know the value of godliness. Such are the wise men of this world, whom the Lord charges with folly. They attend not to the concerns of their souls, but reject the salvation of Christ, for fear of marring their inheritance. But God did Boaz the honor to bring him into the line of the Messiah, while the kinsman, who was afraid of lessening himself, and marring his inheritance, has his name, family, and inheritance forgotten. – MATTHEW HENRY COMMENTARY

So Boaz took Ruth, and she became his wife. And he went in to her, and the Lord gave her conception, and she bore a son. 14 Then the women said to Naomi, “Blessed be the Lord, who has not left you this day without a redeemer, and may his name be renowned in Israel! 15 He shall be to you a restorer of life and a nourisher of your old age, for your daughter-in-law who loves you, who is more to you than seven sons, has given birth to him.”

Ruth gave birth to a son, and she found herself in the genealogy-ancestry of Israel’s King David and the MESSIAH! Just as Ruth, we once were not a people of God, we too were outside of God forbidden to enter the congregation of the LORD Deut. 23:3, without hope and alienated from God.

Ruth humbled herself at the kinsman redeemer Boaz asking for his acceptance and help, every woman must humble herself at the feet of the LORD Jesus Christ and seek His saving redemption. Ephesians 2:12-13.

Just like Ruth found earthly security, any woman who humbles herself before the Lord Jesus will find spiritual rest.

Just like beautiful Ruth our faithfulness and devotion to God will affect generations to come in ways we may never see, by the grace of God leaving a godly legacy. We must trust in God’s sovereign provision and rest in the truth that He causes all things to work together for good to those who love God, to those who are the called according to His purpose, Romans 8:28. 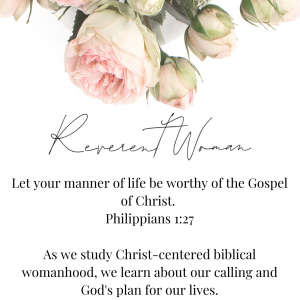